Orkney and the Ness of Brodgar: A 5,000 Year Old Enigma 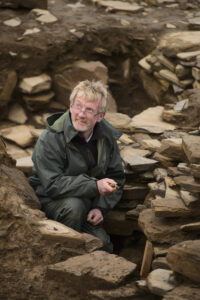 This program is made possible through the generosity of an Anonymous Donor.

Today you will embark on an incredible journey to Scotland’s remote Orkney Islands. The most significant Neolithic monuments in Western Europe can be found on the Orkneys. Today you will be introduced to the most recent, spectacular find, The Ness of Brodgar by none other than the archaeologist in charge of its excavation; Nick Card. Card will give you an overview of Orkney and its major monuments but will focus primarily on The Ness of Brodgar – a vast Neolithic complex discovered in 2002. https://www.nessofbrodgar.co.uk/  You can support this important excavation by donating here: https://www.nessofbrodgar.co.uk/donate/

About Our Speaker: Nick Card has worked widely throughout Britain since graduating from Glasgow. Since moving to Orkney over 30 years ago he has directed and managed a wide range of projects for the Orkney Research Centre for Archaeology within the University of Highlands and Islands Institute of Archaeology that he assisted in establishing.

Since the inscription of Orkney’s World Heritage Site, he has been involved in research and fieldwork relating to the sites: as director of the excavations at Bookan Chambered Tomb; as co-ordinator of the WHS geophysics programme; and as a major contributor to the Research Agenda. His interests lie in all aspects of the prehistory of Britain and the Highlands and Islands with particular reference to the Neolithic.

Since 2004 Nick has directed the Ness of Brodgar that has become internationally recognised, reported widely including the cover article in National Geographic, and the recipient of several awards, including recognition by the American Institute of Archaeology; the Current Archaeology Research Project of the Year; the international Andante Travel Archaeology Award; and in 2019 a Shanghai Archaeological Forum Award.

He has published widely and lectured in the UK and abroad. In 2017 he was awarded the Kress Travelling Lectureship by the Archaeological Institute of America lecturing across the USA.

Contemplative Yoga with Judith Ehrman-Shapiro via ZOOM Give Local!