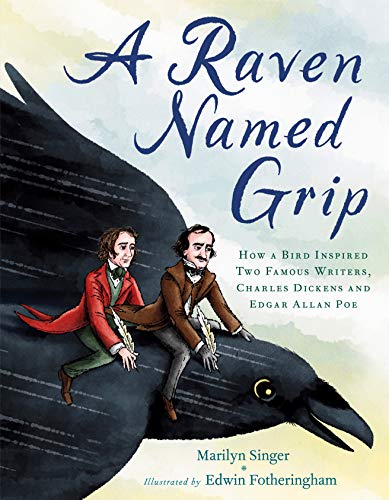 You probably know the story, A Christmas Carol by the beloved novelist Charles Dickens. And you’ve probably heard of the master poet, Edgar Allen Poe an his most famous line, “Quoth the Raven, NEVERMORE.” But did you know it was Dicken’ own pet raven, Grip, that inspired Poe’s great poem? Today author Marilyn Singer will read her new book which was inspired by a program she attended at White Memorial! It’s a little history, a little biography, a little ornithology, and a lot of charm! You’ll have an opportunity to buy a signed copy of, “A Raven Named Grip”. 12:00 p.m. reading and book signing in the Museum. Admission is free.

Marilyn Singer was born in the Bronx and lived most of her early life on Long Island, NY. She attended Queens College, and for her junior year, the University of Reading, England. She holds a B.A. in English from Queens College and an M.A. in communications from New York University.

In 1974, after teaching English in New York City high schools for several years, Marilyn began to write – initially film notes, catalogues, teacher’s guides and film strips. Then, one day, when she was sitting in the Brooklyn Botanic Garden, Marilyn penned a story featuring talking insect characters she’d made up when she was eight. Encouraged by the responses she got, Marilyn wrote more stories and in 1976 her first book, The Dog Who Insisted He Wasn’t, was published by E. P. Dutton.

Since then, Marilyn has published over one hundred books for children and young adults. Her genres are many and varied.